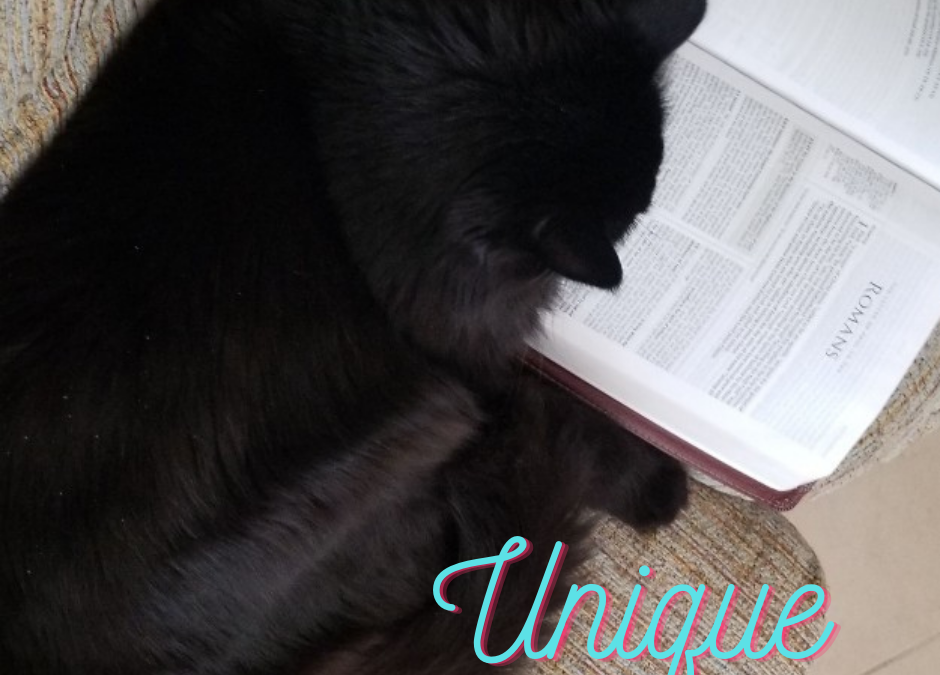 Are we unique? Look at our culture. Look at our society. We all seem to be striving to be the same. Some call it trending to make it seem like you might be left behind if you don’t go along with the trend. Get the latest clothes so we can be what? The Same. Wearing the hottest fashions. Looking like the stars in Hollywood. To be “in” instead of “out”! Are we really unique?

Uniqueness is an interesting word. According to Merriam-Webster it is “being without a like or equal. The word is used frequently in America. We say things like “oh that was so unique” or “She had a unique personality.” So different. Different than anything else in the world! Unique.

But from childhood we are taught to not embrace our uniqueness Instead we are taught to conceal, push away, or reject our uniqueness. For example, what are some of the most commonly asked questions of toddlers once they reach the age of comprehending bigger concepts and have the ability to respond with reasoned or learned ideas? We ask them things like “what do you want to be when you grow up?” The answers may be desired or may be learned by what is familiar to them. Answers like, “I want to be a fireman” or “I want to be a policeman” or “I want to be president” are often rattled off for adult approval.

We’re taught from an early age to assimilate, to strive to be like someone else, instead of looking at our uniqueness and asking what God has for us. We spend a lot of time asking what we want to be for us. This indoctrination to sameness continues into our young adult years and high school years. Sports and athletics takes hold and another kind of pursuit of likeness comes into being. “I want to be like Mookie Betts” or whoever the latest star is on the field for whatever sport. About that time the “unique” desire to become lawyers and doctors are part of the striving to be the same as someone else. It is super important, says our culture, to find your group–your people, your tribe.

It is true, we are made for fellowship (existing in groups). The Bible makes that fairly clear. But fellowship doesn’t mean sameness it means embracing others where they are and allowing them to embrace you (and enjoying that mutual embrace). Fellowship is not a pursuit to be like others in your group but to be loved by them and to love them.

Yet in the first line of the book of Romans, a letter to the church in Rome, the author introduces himself. He wrote, “Paul, a servant of Christ Jesus, called to be an apostle, set apart for the gospel of God.” He is set apart. Even in his time, the seeking for sameness was all around him. There were Romans, Roman soldiers, Pharisees, Sadducees, and Christians. Today we still have Christians. The other groups have been replaced by other groups with newer names for the same thing. Names like the United States Marine corps, the Army, Muslims, Pentecostals, Evangelicals, Protestants, Orthodox Jews, and Catholics. We have our groups to belong to; our sameness to seek.

Despite the implied pressure to be like everyone, Paul, in the first line of his letter is saying that he is set apart. Unique in this one way. Unique in the way, the truth, and the life. He is leaning into his uniqueness instead of hiding it. He’s standing on what he’s called to be, what he uniquely brings to the world.

He’s set apart and not to be shamed. He’s set apart for the Good News. Paul belonged to the first group of Christians there is no doubt. Did he want people to adopt a sameness, a likeness of mind, a likeness of worship of Jesus Christ the Savior of the world? Of course he did. At the same time, he was quick to point out that there was a uniqueness in his calling. A uniqueness that would serve his God. Our God. An amazing uniqueness that he was able to identify.

Now in the big scheme of things, through busyness and the practicality of making life happen in those days, Paul’s uniqueness was no more or no less than somebody who preached a different message. He didn’t look any different. He didn’t smell any different. His writing styles were not that much different. He was part of that culture. But he was quick to point out that there was a slight uniqueness in him that gave him a difference in the kingdom of God.

Paul was famous. His statement about his uniqueness, at this point in the letters, may seem a little vague. Later in the letter he puts further depth and definition to his uniqueness but at this introduction the reader would know that his claim had everything to do with the way in which Paul came to have the title of Apostle. He was named an Apostle in a way that didn’t involve following Jesus around in his ministry for three years. It did involve the fact that he was once a persecutor of Christians. Once a Pharisee. Once a scholar of religion. A Roman citizen. He was an achiever there is no doubt. So not only was he Christian but he belonged to all of those other groups as well. He was unique because he, among all of those other groups, was one of the few–if not the only one–to profess Jesus as Savior and Lord.

However, on the surface (to those looking in from the other groups) Paul was simply a guy who went off the deep end. I can imagine the scoffers whispering or shouting ugly things about Paul’s uniqueness. Imagine if Facebook existed in those times. Paul could have been canceled with just one post. In the culture of the time, his uniqueness was probably a negative among many and a positive among few.

Paul gives you and me a clue about our calling. He was called to be an apostle (expert) for the unique purpose of spreading the Good News. In my previous writings on this first sentence in this letter to the Roman church, I wrote about discovering your calling by opening your heart when you ask God what your calling might be. It’s not necessarily to write 13 books of the Bible. Your gift and your contribution for the Gospel of God is very unique to you. Because it’s unique to you it will be unique in the Kingdom. He’s given you a gift and a calling that is unique to you in your current circumstances/culture/group.

Now that doesn’t mean that there will not be others who will do the same thing that you do in similar circumstances. While Paul was doing what he was doing, other Bible book writers were alive like Peter and Luke. The other apostles were around and they were doing the same thing in a different place. Set apart for the Gospel. Apostles of the true Savior. He’s given those gifts to you and to me.

I want to encourage you today to find your calling and know that you are unique. Proclaim your uniqueness. Once you find what God wants you to do for his Kingdom, claim your uniqueness! Embrace your uniqueness! No matter what is said for or against you on Facebook, Parlor, Twitter, news reports, sky writing, smoke signal, or whatever, find what is unique for you in the Kingdom of God and shout it from the rooftops! You are set apart for Jesus.